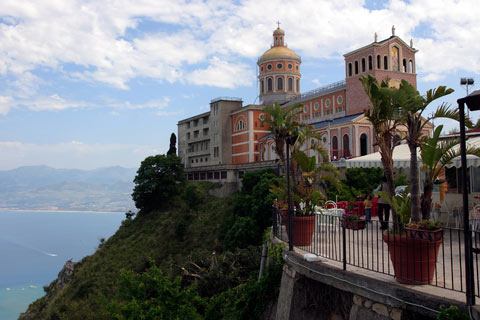 The ancient town of Tindari is found in north-eastern Sicily, on the northern coast

First an important Ancient Greek settlement, it was under the Ancient Romans that the town flourished and several Roman monuments can still be seen here scattered around the surrounding landscape.

To arrive at Tindari there is a car park halfway up the hill and then a shuttle bus will take you up to the top.  You will arrive at the Santuario della Madonna Nera (Sanctuary of the Black Madonna). Built in the 1950's the current Sanctuary is an impressive sight and as it sits on the top of a cliff overlooking the ocean it can be seen from some distance away as you are driving up to the site.

The ancient Sanctuary was possibly built on the site of a pagan temple. It was destroyed by the Ottoman army in 1544 and rebuilt between 1552 and 1598. The church was home to a statue of the Virgin that has been attributed with having miraculous powers, and as a result many pilgrims visited the sanctuary each year. The statue is a Black Madonna which is rare and was carved in the 12th century. The statue sits next to an insciption saying "black am I but beautiful". 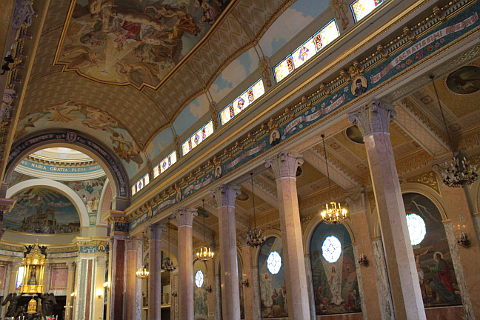 This Sanctuary became too small for the number of pilgrims arriving to venerate the Virgin of Tindari. In 1957 the bishop began work for the new Sanctuary which involved various excavations and demolitions but the old church was kept intact.

Legend has it that originally the Madonna was on a ship coming back from the Orient. The ship sheltered from a storm in the Bay of Tindari and the ship then could not be moved until the trunk containing the Madonna was unloaded. Locals found the trunk and carried the statue up the hill where there was already a Christian community. This is all thought to have taken place in between the late seventh century and the ninth.

Most tourists seem to visit the Sanctuary and the various market stalls that surround it and then leave but continue along the road on foot and you get to the ancient city of Tyndaris, a wonderful ancient Greek colony that was conquered by the Romans and the ruins of which can now be explored for a modest fee.

We were not sure initially whether to pay and enter as it does not have the reknown of Selinunte and Agrigneto but we were so pleased we visited. Smaller and more intimate than those sights it is in a beautiful location surrounded by flowers and with a backdrop of the sea and was a pleasure to explore.

It is said that a part of the city fell into the sea in the first century AD, bringing to an end the glory days of Tindari, but much of the ruins are still visible. Highlights among the Roman ruins are stretches of defensive walls, a Roman Theatre, a Basilica, sections of the original town and some good mosaics. 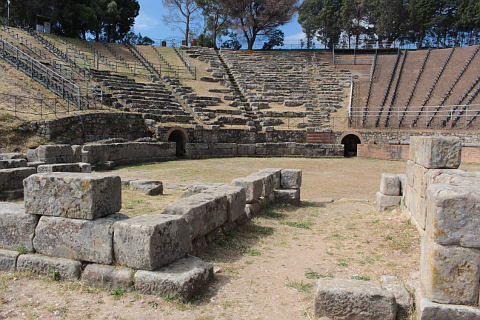 The theatre is a Greek theatre built in the late fourth century AD and then the stage demolished to transform the theatre into a Roman arena.

The remains of a Basilica thought to have been erected by the early Roman empire can be admired. Built of large sandstone blocks, two of the original three storeys survive. Each floor is decorated with columns and was once, according to Cicero, surrounded by porticos and statues. A couple of excellent modern statues are now on display in the ruins of the basilica.

The remains of the thermal baths contain a number of excellent mosaics though if you are interested by these be sure to visit Piazza Armerina where the Villa del Casale has the most amazing display of mosaics! 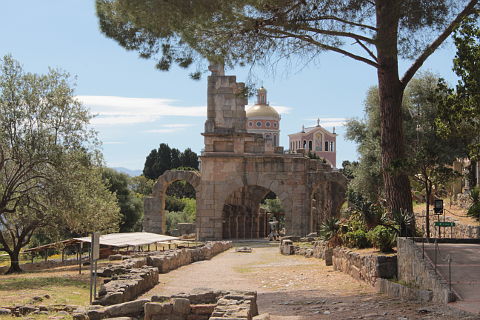 A museum houses local finds from neolithic, Greek and Roman times. Its exhibits give an interesting account of the history and development of Tindari. The huge head of Augustus from the basilica and items from a Bronze Age settlement are amongst the exhibits.

The ancient site of Tindari sits on top of a cliff above the Tyrrhenian Sea. Below is a 1.5 kilometer long sandbank which seen from above makes the coastal views fantastic. This is the so called 'tongue of sand'. The sand bank is large and has various lakes on it offering unusual conditions for the flora and fauna and leading to it being made a nature reserve.

Nearby Milazzo is a pleasant coastal town and has ferries to the beautiful Aeolian Islands. These volcanic islands each have individual characteristics. Lipari is the largest and has a lively harbour town. Panarea is the chic holiday destination of the jet-set crowd. Stromboli still has an active volcano and a night-time boat ride allows you to watch the pyrotechnics and Vulcano has a brooding atmosphere and strong sulphur smell.

Map of Tindari and places to visit

Places to visit near Tindari 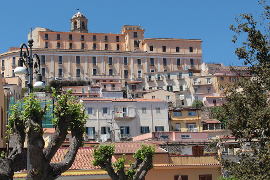 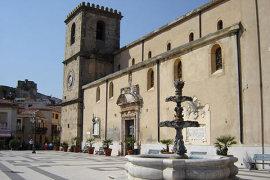 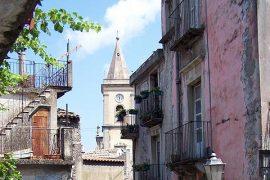 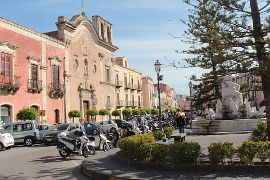 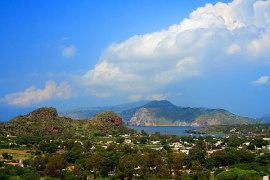