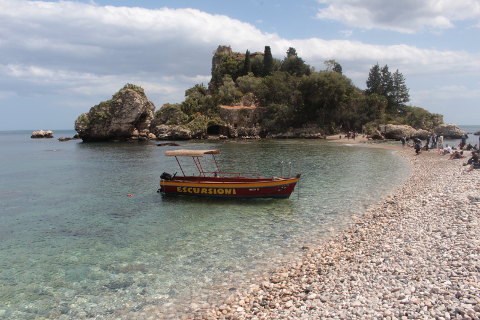 There are beaches around much of the coast of Sicily - from fine long sandy beaches to grey volcanic beaches, interspersed with dramatic rocky coastline, harbours and ports and with an impressive backdrop of the Sicilian hills...and areas that are rather overdeveloped!

Here are some suggestions for beaches moving roughly clockwise around the coast from Palermo:

Mondello, near Palermo (north Sicily), has a long sandy beach between Monte Pellegrino and Monte Gallo.

There is a good sandy beach at Cefalu on Sicily's north coast. 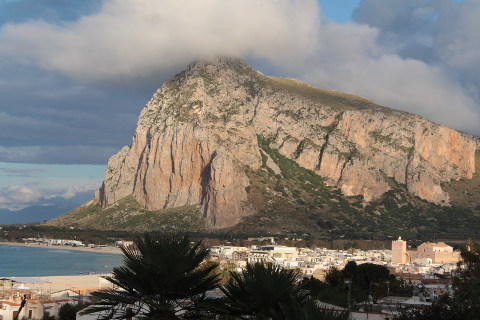 On the coast below Taormina (eastern coast) and reached via a cable car there is a sand/pebble beach at Mazzaro and a pebble beach at Isola Bella. More beaches are available close by including Spisone, Giardini-Naxos and Recanati. Isola Bella, pictured at the top of the page was our favourite in Sicily. It might be stony but it is very beautiful!

Heading south-east the beach at Marina di Ragusa and the Sampieri beach south of Modica are popular and among the best in the region. The Vendicari beaches are also highly reputed. On the southern tip of Sicily there is a beach at the 'Island of the Currents' where the waves from the Ionian and Tyrrhenian Sea collide together.

One of the most famous beaches of Sicliy is the Scala dei Turchi beach, near Agrigento, with its dramatic tiered white cliff which has become something of an instagram sensation!

Near Trapani the most popular beach is situated at San Vito lo Capo, popular with tourists and locals alike. This has a very long sandy beach and so has become a very popular resort.

A short walk from Scopello in the Zingaro Natural Reserve (northern coast of western Sicily) there is a small yet very attractive sandy beach recently listed as one of the top 10 beaches in Europe. Several other small coves and beaches are also found within the Natural Reserve.

There are many more splendid sandy (or rocky, or lava...) Sicily beaches to discover during your visit, and other opportunities in the islands off the coast, often in impressive locations and frequently with stunning turquoise seas ideal for snorkelling and diving - those listed are just a selection of the highlights.