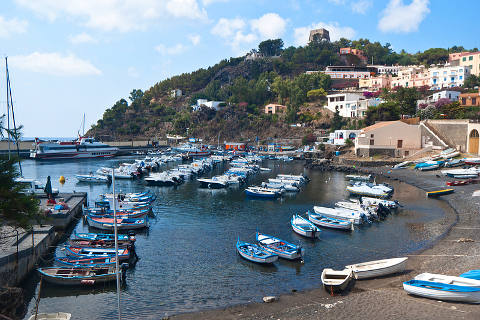 Ustica is one of the smallest of the Aeolian islands off the northern coast of Sicily, and also the most remote being some way to the west of Lipari, the main island (and 100 km west of Alicudi, the closest of the other islands in the group.

To get to Ustica catch the ferry from Palermo or Trapani in Sicily or Naples on mainland Italy. Palermo is the only place with daily crossings.

Don't let the slight incovenience of reaching Ustica deter you from visiting, especially if diving is your hobby. There are numerous underwater caves to explore around the coast of Ustica and beautifully clear and clean waters, so it is very popular with the diving community. Among the many caves to explore are the 'Grotta Azzurra', the 'Grotta di San Francesco il Vecchio', the Green cave, the Cave of the Boats, and the 'Shrimp Cave'. 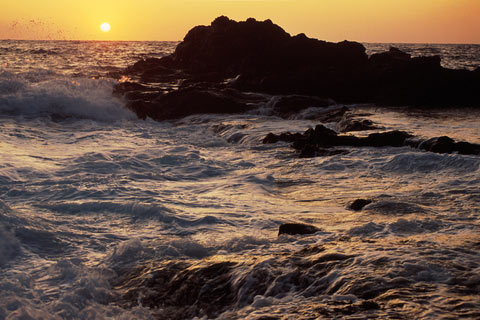 The diversity of marine life is part of the main appeal for divers, while the rest of us can enjoy the landscapes and varied plant life with the a wide range of natural plants, shrubs and trees to enjoy. These include olive trees, pine trees, eucolyptus trees, euphorbia and broom.

Remarkably given its location 70 km off the coast of Sicily, Ustica has also had a long history of occupation dating from prehistoric times, and two important ancient villages have been found and it is clear that 3500 years ago the island was an important trading post. Given the size of the defences that surrounded one of the villages 'faraglioni' it is also clear that it was far from a peaceful life that they led.

In Faraglioni meter high walls surrounde a village of round and quadrilateral huts and within these a rich variety of ceramics have been found. Omo Morto is another Bronze Age village on the island and the two are thought to have developed due to trade in obsidian which is a natural volcanic glass.

Another village, with a fortress and troglodyte houses, dates from the early Roman period and is built into the top of a hill called Falconiera.

The island was also occupied during more recent centuries as witnessed by some medieval ruins including the "Monasterium Sancte Marie de Ustica" (a benedictine monastery), some Bourbon fortifications, a 5th century necropolis and a Byzantine village.

Ustica is one of the seven Aeolian islands which are a UNESCO World Heritage Site because of their volcanic phenomena.  They are all volcanic islands and so have a distinctive volcanic shape but individually they are quite different. Lipari is the largest of the islands and the most populated, it has an attractive harbour and one of the best view points on the islands, Panarea is very chich and regularly attracts Hollywood stars and luxury jets in the summer; Stromboli is one of just three active volcanoes in Europe and various tours allow you to witness the volcanic activity; Vulcano has a barren landscape with smoking fumeroles and you can treck to its sulphur-reeking volcano.

Much quieter, like Ustica, Filicudi is popular with divers and has lots of underwater wrecks to see. For spas and vineyards visit Salina.

Map of Ustica and places to visit