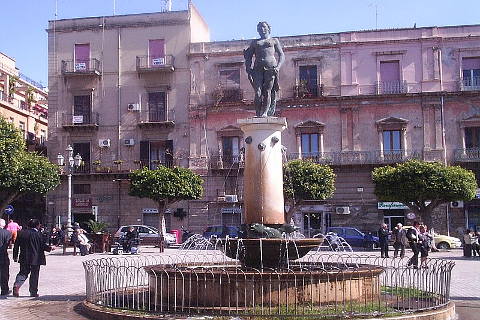 Gela is probably the oldest town in Sicily after Syracuse. Located on the southern coast of Sicily by the Mediterranean, roughly forty miles west to Syracuse, Gela was an important center of Ancient Greek civilization. The foundation of Gela was followed by that of Agrigento, which emerged as an iconic symbol of the Greek superiority in the region at the time.

In order to explore and understand the history of Gela in an effective manner, a visit to the Archaeological Museum can be useful. Apart from that, there are plenty of archaeological ruins around the town anyway. Gela has its own Acropolis, the Capo Soprano, the Greek fortifications around the beach, the public baths, the medieval Castelluccio in the outskirts of the town, Greek temples and the beautiful Torre di Manfria, forming a part of the sand landscape of the beach.

Among the archaeological ruins in Gela, the Acropolis is the largest, and its ruins constitute of at least a part of a city of the Ancient Greek period. Dating back to the late fifth century BC, the city contains ruins of houses and markets in addition to the ruins of temples and sacred buildings that surely no city in Sicily avoids!

Of the temple ruins in the Acropolis, the most impressive one is that of Athena, Greek goddess of wisdom, handicrafts and reason. The Acropolis is one of the major tourist attractions that in Gela acts like a magnet in attracting archaeology and Greek history enthusiasts to travel to this southern town.

Along with its deep roots in history, Gela can offer you a good chance to relax on beautiful sandy beaches by the Mediterranean Sea. The area around Gela and neighboring Ragusa and Vittoria is the richest in sandy beaches on the entire island. The beaches near Gela include Bianco Grande, Bianco Piccolo, Cammarana, Lanterna, Baia del Sole, Baia Dorica and Passo Marinaro.

Map of Gela and places to visit